Christina Aguilera is denying claims she’s abusing her son after photos surfaced showing the boy with a black eye. 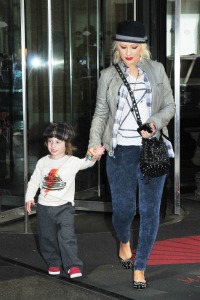 What happened to Christina Aguilera’s son? The singer showed up at the airport with a bruised and battered kid yesterday — and now the accusations are flying.

It’s no secret that Christina Aguilera has been living hard since her divorce from Jordan Bratman. Her drinking and weight gain are evidence that the judge of The Voice is still stressed over the changes in her life — but is she stressed enough to harm her child, as rumors suggest?

No way, says the songstress. Christina Aguilera strongly denies laying a finger on her son and says his shiner is the result of a simple accident.

Aguilera told friends that there’s a simple explanation for Max’s injuries. According to TMZ she says the three-year-old was under the care of his nanny last week when he tripped over a rock chasing a squirrel in a local park, bruising his face. Boys will be boys.

A trip to the doctor revealed no broken bones — but Christina’s reputation is certainly taking a beating lately.