Model-turned-actress Milla Jovovich has proven herself to be quite the action star. In the latest international poster for her new film The Three Musketeers, she strikes a deadly pose. Unlike the female leads in most period pieces, Jovovich doesn’t play a damsel in distress. Her character’s just as, if not more dangerous than her male counterparts. 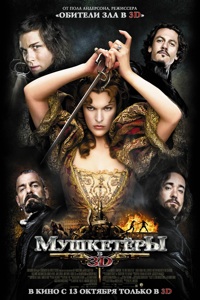 Milla Jovovich will be surrounded by testosterone in Paul W.S. Anderson’s take on The Three Musketeers. The director, who’s also her husband, previously worked with Jovovich on the extremely popular Resident Evil franchise.

The Three Musketeers is a classic French novel that’s been adapted over 20 times for the big screen. So what makes Anderson’s version different? For one, it’s in 3D and secondly, we’ve never seen it with extreme fight scenes that involve the female lead. If you haven’t seen Jovovich’s character in action, you should really watch the trailer.

Jovovich has proven throughout her career that she’s more than just a pretty face. She fought fiercley in films like The Fifth Element and Ultraviolet, while showing her dramatic range in The Messenger and Stone.

In Musketeers, she plays the treacherous Milady, who rubs elbows with the shady Buckingham (Orlando Bloom) and Richlieu (Christoph Waltz). In an attempt to overthrow the monarch, the trio accuses King Louie’s wife (Queen Anne) of having an affair with Buckingham. It’s up to the Musketeers and the young D’Artagnan to expose their lie and save the country from collapse.