Tom Brady and Gisele Bundchen are gorgeous, successful – and were just named the world’s highest-paid celebrity couple. Find out what other high-profile couples made the list. 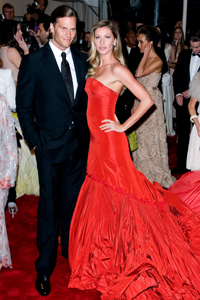 NFL star Tom Brady and his supermodel wife Gisele Bundchen seem to have it all – successful careers, adorable kids, knock-out looks and a huge bank account! In fact, Forbes magazine has named them the highest-paid celebrity couple of the year, with combined earnings of $76 million between May 2010-2011.

Gisele brought in $45 million with her endorsement and business deals, while Brady brought in $31 million – and he signed a four-year year, $72 million contraction extension with the New England Patriots. How do you like them apples?

Coming in third place is the power couple of Brad Pitt and Angelina Jolie, who earned $50 million together. The fourth-place honor was given to David and Victoria Beckham, who made $45 million. He brings in the majority at $40 million, while Victoria, who just gave birth to daughter Harper, earned $5 million on her clothing lines.

Forbes gave the fifth-place spot to a couple who has actually never confirmed they are even a couple! Edward and Bella….er, Robert Pattinson and Kristen Stewart brought in $40 million ($20 million each) from their hit Twilight saga.