Twins have arrived for CSI’s William Peterson! The proud father of a baby boy and girl also happens to be a grandfather. 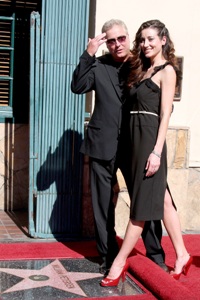 CSI star William Petersen is now the father of twins! The 58-year-old actor and his wife Gina Cirone welcomed twins via surrogate last month on July 5.

The twins, a boy and a girl, are the second and third child for William Petersen. The actor’s first child is 36-year-old Maite, who herself is the mother of two young boys: Mazrik William born in 2003 and Indigo August, born in Aug. 2009.

The names of William Petersen’s new son and daughter have yet to be released, but we do know the pair were born prematurely. “The babies are doing great and are improving every day and we can’t wait for them to come home,” the couple told People.

Gina, a biology teacher, is the second wife of William Petersen, who was previously wed to Joanne Brady. The twins are the first children for the couple who wed in 2003.

Up next for the father of twins is staring in the upcoming comedy-drama film Detachment along with Adrien Brody and James Caan.

Congratulations to Gina and William Petersen on the birth of their twin babies!