Charlie Sheen is about to get roasted! No one is more excited than the man of the hour, who can be seen hootin’ and a hollerin’ in this freshly released roast promo clip.

Charlie Sheen’s roast is nearly upon us! With less than a month to go until comedians, celebrity friends and possibly a few foes unleash their fury on the former Two and Half Men actor, all we’ve got is a bomb-filled promo to tide us over. 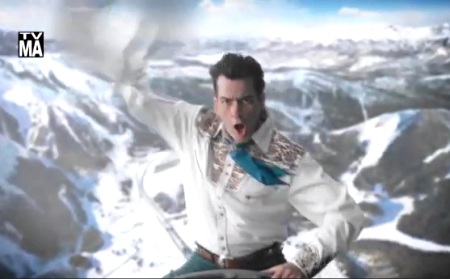 The Charlie Sheen roast promo clip (watch for yourself below!) features the former Two and a Half Men star riding a bomb cowboy-style into snow-capped mountains below — a la Stanley Kubrick’s 1964 film Dr. Strangelove.

The 15-second clip entails a great deal of hootin’ and hollerin’, cowboy hat waving and maniacal laughing as the 45-year-old rides a nuclear bomb with the word “truth” painted on it. Accompanying Charlie’s descent is the one and only voice of Ozzy Osbourne crying “All aboard!” per the lyrics of Crazy Train.

Comedy Central’s “roastmaster” Jeff Ross has given a handful of hints as to what we can expect on Sept.19. “These roasts are often therapeutic for a person,” he says. “These are things he needs to hear. No one deserves to be roasted more than the warlock. I see this as a comedy intervention. This is the first step of what you could call a comeback.”

Will you be tuning in to watch Charlie Sheen get roasted?