Taylor Swift may never live down the night her undies upstaged her performance thanks to a little invention called Youtube. 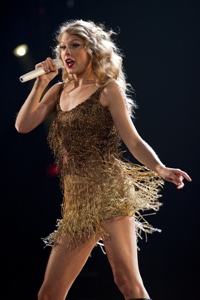 Taylor Swift’s wardrobe malfunction was the talk of Ryan Seacrest’s radio show Tuesday morning. The singer opened up about just what went down the moment her skirt went up!

In a YouTube video now watched by an astounding 9 million (and counting!) viewers worldwide Taylor Swift can be seen having a Marilyn Monroe moment mid-concert. What may have simply been a surprise between the country sensation and fans in the first row has become a hot topic thanks to modern technology.

“We have wind machines for a few songs in the show and they weren’t supposed to be on during that song. I walked over thinking it wasn’t on and it just kind of blew it up a little bit. I was just sort of like, ‘Well, that’s new’ and just continued on with the show.”

We think Taylor looked a little more surprised than that, but kudos to the 21-year-old for not missing a single lyric despite the backside breeze.

Up next for Taylor Swift’s Speak Now World Tour is four shows at the Staples Center in Los Angeles. Think she’ll be avoiding fans like the plague?