Glee fans can put down their cleverly aimed slushies and back away from the decision that was Chord Overstreet’s. His face might not be permanently plastered through the halls of McKinley High, but it will be heading to ABC. Read on for all the details… 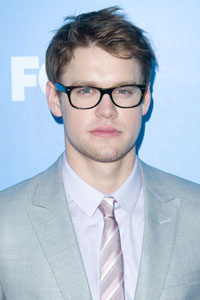 When one Fox door closes an ABC one opens up — if you’re Chord Overstreet.

For Gleeks not in the know, Chord Overstreet is going to be guest-starring on The Middle as a new teacher in Brick’s (Atticus Shaffer) school.

Chord Overstreet decided not to return as a regular cast member on Glee so he could persue other opportunities. While it’s not a regular role, his new guest stint on ABC’s The Middle might give him comedy growth.

The Middle star, Patricia Heaton, tweeted on Tuesday, “For all you @GLEEonFOX fans, @chordoverstreet is playing Brick’s 4th grade teacher this year on #TheMiddle!”

For those of you who don’t know, Patricia Heaton plays Frankie, Brick’s mom.

With all the gossip swirling about whether he would be returning to Glee and if not, why he was let go, it was finally laid to rest that Overstreet and Glee parted ways due to his own endeavors.

Fans can catch Chord Overstreet on The Middle Wednesday, Sept. 28. The new season kicks of Sept. 21 on ABC.

What do you think of Chord Overstreet’s new guest-starring role on ABC’s The Middle?

Do you see him as anything more than Sam? Tell us, we want to know!