Anthony Bourdain, star of the Travel Channel’s No Reservations, is always ready with a quip and comment about things he both likes and dislikes. But when it comes to the Food Network, he has no reservations about his utter dislike for the channel and the hosts that star on it. 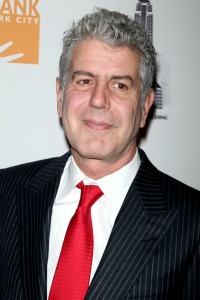 Anthony Bourdain clearly has a bad taste in his mouth when it comes to the Food Network. The Travel Channel star recently received backlash for quipping that Food Network star Paula Deen is “the worst, most dangerous person in America.” Deen, who is known for her generous use of butter in her cooking, “is proud of the fact that her food is bad for you,” Bourdain said. “Plus, her food sucks.”

Check out Paula Deen’s response to the statement here >>

But this isn’t the first time Bourdain has set his mouth running against the food channel. The incident with Paula is just a long line in a string of bad comments against the channel that gave him his start.

Read more about the continued jabs between Deen and Bourdain here>>

Oh yeah, did you know that No Reservations was originally on the Food Network? It was called A Cook’s Tour. Two seasons were shot and aired, but the series was canceled after Bourdain complained that the Food Network was not about food anymore and its chefs were not true chefs.

“He’s smart. You actually learn something from his commentary. I’lll admit it, I watch and enjoy Iron Chef America in all its cheesy glory.”

“I still find him unwatchable [Legasse left the network and will soon have his own show on Hallmark Channel]. As much mileage as I’ve gotten over the years, making fun of Emeril, he deserves a lot more respect than I’ve given him.”

“Now does anyone actually believe that Bobby Flay can’t make a better chili than a supermarket ground beef-bearing amateur? It’s a cruel exercise in humiliation. I find the network’s misuse of one of their founding chefs to be nauseatingly cynical.”

“Is there any more egregiously under-used, criminally mishandled, dismissively treated chef on television? Relegated to the circus of Iron Chef America, where, like a great toothless lion, fouling his cage, he hangs on and on, a major draw.”

“Complain all you want. It’s like railing against the pounding surf. She only grows stronger and more powerful. Her ear-shattering tones louder and louder. She sells the smug reassurance that mediocrity is quite enough.”

“Pure evil. This frightening Hell Spawn of Kathie Lee and Betty Crocker seems on a mission to kill her fans, one meal at a time. She must be stopped.”