Tony Bennett to introduce an Amy Winehouse tribute, which includes their new duet Body and Soul, at the VMAs. 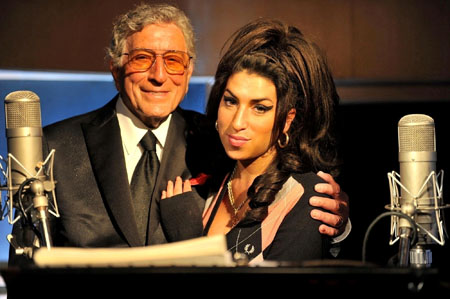 Bennett will introduce a tribute to the blues-revival singer which will include a video of the two recording the track Body and Soul at London’s Abbey Road Studios in March, according to MTV. Body and Soul will appear on Bennett’s upcoming album, Duets II, due Sept. 20.

“It was a thrill to record with Amy Winehouse, and when you listen to the recording of Body and Soul, it is a testament to her artistic genius and her brilliance as one of the most honest musicians I have ever known,” said Bennett in a statement.

Bennett and Winehouse’s version of Body and Soul, a jazz-pop standard recorded by Ella Fitzgerald,  Billie Holiday and Frank Sinatra in the past, will be released as a single by Columbia Records on Sept. 14, which would have been Winehouse’s 28th birthday. Proceeds raised by the single will go toward the Amy Winehouse Foundation, which supports several charities connected with children.

“Our family is honored that the VMAs are giving Amy this wonderful tribute,” said Winehouse’s father, Mitch Winehouse, in a statement. “We know that Amy’s performance of Rehab at the MTV Movie Awards played an important part in Amy’s worldwide success.”

No illegal substances were found in Winehouse’s system at the time of her death, according to a toxicology report that was released on Tuesday.

The VMAs will be broadcast 9 p.m. Sunday on MTV.

READ ON FOR MORE AMY WINEHOUSE

Amy Winehouse charity back on after cyber squatter drama