Gavin DeGraw doesn’t remember a lot about the night that left him with serious injuries. 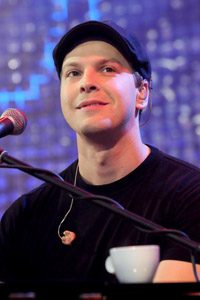 Gavin DeGraw is finally speaking out on the attack that left him with a broken nose, concussion and lots of bruises.

The Chariot singer told People that he just finished “a few drinks” with friends on Manhattan’s Lower East Side when the attack happened.

“I had a night off, and I met up with some friends at the bar I own with my brother. We had a few drinks. I put my friends in a cab and I walked home because I live pretty close,” he said. “I remember maybe three guys said something to me and I didn’t appreciate it, and I guess I let them know I didn’t appreciate it. They weren’t exactly on the debate team, so I ended up with a tube down my throat.”

He doesn’t really remember what happened after the attack.

“I just literally remember an exchange of words that lasted a second and then being very bloody,” he added.

His brother and friends insisted that DeGraw wasn’t drunk at the time of the attack, though he said he had a few.

“I can’t say I was drunk,” the singer added. “I know I had a few drinks with friends.”

The good news — for both DeGraw and fans — is that he’s expected to rejoin Adam Levine and the rest of the gang when Maroon 5 and Train hits Columbia, Maryland, on Aug. 24.

“It’s definitely a combination of excitement and nerves, because my breathing isn’t exactly the same,” he explained of his return to the stage. “I’m feeling out my breathing through my nose trying to see if the swelling’s going down. The sensation is mildly different, so that makes me fearful about singing.”

Still, he’s got a good attitude about the whole situation.

“It was a terrible night for me, but fortunately I got through it. I still look like my mother, and onward and upward.”

And that’s why we love you, Gavin.

Are you happy to see Gavin DeGraw back in fighting form?