Lady Gaga and The Simpsons: an iconic pair if we do say so ourselves! 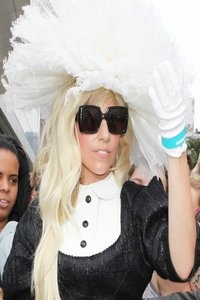 We wonder if Marge Simpson would be able to walk a mile in Lady Gaga’s platforms?

Mark your calendars, Lady Gaga is heading to Springfield in 2012. According to a report from Entertainment Weekly, the theatrical singer will guest star on an episode of The Simpsons called “Lisa Goes Gaga,” slated to air in 2012.

Gaga will, of course, play herself on the Fox show and she couldn’t be more thrilled.

“I make music, but I don’t do voice-overs every day of the week, and their characters are so awesomely convincing and sincere and wild and funny, I had to remind myself constantly of the sincerity of the humor,” Gaga revealed.

The Mama Monster added, “That’s what I was trying to focus on, not putting on a character too much and really being as sincere as I could with the lines.”

Lady Gaga is said to have a smooch with Marge after coming to town to cheer up Lisa. “I play a little bit of a slut,” Gaga explained. “The apple doesn’t fall far from my artistic tree,” she added.

As for stepping into such an iconic show, she said it was “one of the coolest things I’ve ever done” and “my dad’s probably going to do 80 backflips when the episode comes out.”

If you can believe this number, the 23rd season of The Simpsons will premiere on Sunday, Sept. 25 on Fox. Don’t forget to watch Lady Gaga open the MTV Video Music Awards on Aug. 28!

Can you see Gaga animated?