January Jones has a bit of a reputation as an ice queen. Mad Men co-star John Slattery begs to differ. 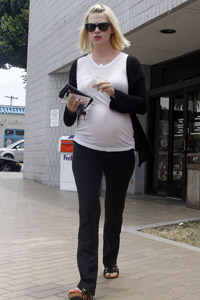 January Jones’ reputation as an ice queen – to put it nicely — is pretty well known these days.

First, Zach Galifianakis spoke out about his, uh, dislike for the Mad Men actress after a chance meeting with her a few years ago.

Then, her former on-screen son gave some advice to his replacement.

“Be careful around January. She’s not as approachable as the others. She’s really serious about what she does,” Jared Gilmore told TV Guide of Betty Draper.

“Everyone else is so nice,” he added. Ouch.

It makes sense, though Jones isn’t exactly known for her sweet disposition. Another example? She lashed out at a Marie Claire UK reporter who asked her about the rumor that she started modeling to show up the mean girls in high school.

“Where are you getting this [expletive]?” Jones barked at the reporter. “It sounds like something I might have said when I was, like, 15. The [expletive]’s in high school were bitches because I was pretty.”

Nope, not full of herself at all.

We hope she tames down her diva-tude before she has her due-any-day-now baby. Slattery thinks she’ll be fine. “I have no doubts she’ll make a great mother,” he added.

We bet Jared Gilmore is just glad he’s not her real life son.

Do you think January Jones’ reputation is accurate or not?