Simon Cowell, never one to be afraid of telling anyone how he really feels, has given a colorful interview in the latest issue of GG. Just what would make dear Simon jump off a bridge? 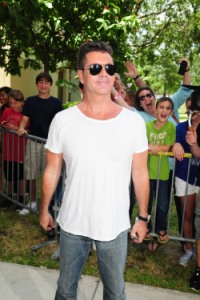 Simon Cowell has always been a man with a plan for success. The 51-year-old, who has said his goal in life is to “get as much money as I can,” is in transition from his American Idol judging duties to launching the Amercian version of The X Factor.

Though he has no plans of slowing down anytime soon, Simon Cowell has thought about what will become of his fortune once he passes. All of it will go to charities that support children and animals, which ironically he has neither. He explains, “You can enjoy it while you’ve got it, and then it’s gone to good causes afterwards.”

On ruling children out:

“At my age, definitely…but the reality is, with the way I live my life, I wouldn’t have the patience. I’d sort of want people born at the age of 10, I think…Truthfully, with the schedule, the crazy hours, I don’t think it would work.”

“My worst nightmare in the world would have been if I’d had to join a golf club and have miserable suck-up evenings with the boss. I actually would rather throw myself off a bridge than have that.”

Growing tired of the Idol routine:

On moving from Idol to the X Factor this year:

“The first two or three years on Idol, I had a blast. And then, as it got more and more successful, I didn’t want to do it anymore. I just felt I was there being paid to do a role, and after a while that’s not very satisfying. So it was hard work the last couple of years. I wanted to do this.”