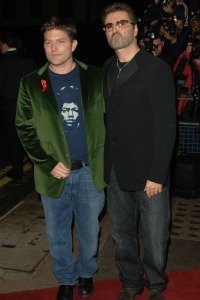 Singer George Michael is looking for Somebody to Love after making a startling revelation to fans at a concert at the Prague State Opera: he and longtime partner Kenny Goss are experiencing their own level of Freedom after a secret breakup over two years ago.

“My battles with substances are well-documented and my partner went through similar problems with drink,” George Michael told the crowd.

“Kenny and I haven’t been together for two and a half years.”

“He brought me a lot of joy and a lot of pain,” he said while introducing a new song Where I Hope You Are in honor of Goss. “The truth is my love life has been a lot more turbulent than I have let on. This is probably the first break-up song I’ve written.”

George Michael and Kenny Goss got together in 1996 and struggled through the Monkey on Michael’s back: His multiple arrests for drug use and even indecent exposure.

We have Faith that George Michael will find Fast Love if he gives it One More Try.