The Muppets are back with The Green Album: an LP featuring some of your favorite indie rock bands including this video below of OK Go. 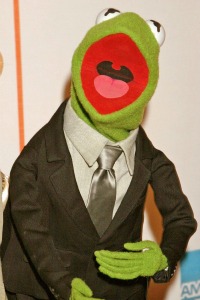 This is the year for Muppet fans! First we hear a new movie The Muppets is coming out in Nov., and now we’re getting a whole album of Muppet music courtesy of some of our favorite indie bands!

The Muppets: The Green Album features classic Muppet songs like Movin’ Right Along and Rainbow Connection covered by bands like Weezer (who famously featured the Muppets in their video for Island in the Sun)  The Fray, My Morning Jacket, Alkaline Trio, Matt Nathanson, Sondre Lerche and OK Go.

Now there’s an amazing video to accompany their song and we have it!

In advance of the Tuesday release of the Muppets Green Album, OK Go has released the hilarious piece: a video mashup with the Muppets featuring nods to their creative masterpieces from some of their previous awesome music videos.

The Muppets Green Album is available on Amazon and in Starbucks starting today.

read on for more of the muppets

Visiting Amy Adams on the set of The Muppets