Brad Pitt makes scruffy look good. The actor appears on the latest cover of New York Magazine alongside a newly svelte Jonah Hill. The duo is promoting the fall release of their upcoming sports drama, Moneyball.

It doesn’t matter if he has long hair, short hair, a beard, goatee or is clean shaven, Brad Pitt can make it work. The Oscar nominated actor is letting his locks hang out in the current issue of New York Magazine. 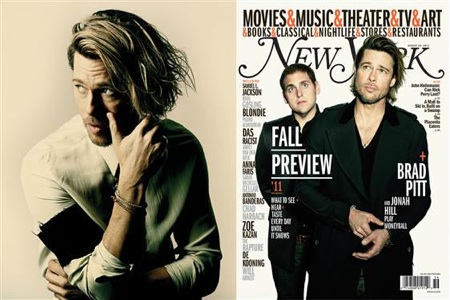 Pitt and co-star Jonah Hill are all about Moneyball, a passion project that Pitt fought tooth and nail to get to the screen. According to Us Weekly (via MSNBC), he signed on to do the film four years ago and “became obsessed” with it. He saw it as more than just another baseball flick.

Hill plays a young man who helps Pitt’s character expose the unfair recruiting system and attempts to create a new one. The actor must have made a good impression on his veteran co-star because Pitt sings his praises. He says, “Jonah’s a revelation in this thing — he’s a study in reserve … really strong work.”

Moneyball is directed by Bennett Miller and opens in theaters Sept. 23.