Jennifer Garner is pregnant with her third child, a rep for the actress and her husband Ben Affleck confirms. 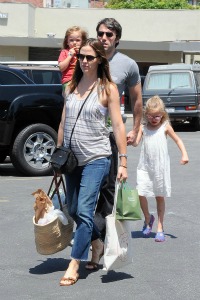 We knew she wasn’t just eating too many cookies! This actress has finally admitted the obvious: Jennifer Garner is pregnant!

In a statement to the Associated Press, a rep for the couple said Garner and her husband Ben Affleck are “thrilled” about the pregnancy.

“She’s always wanted three kids,” a source told Us Weekly. “This was her plan all along.”

Rumors about Garner’s condition have been floating around for at least two months after the Butter actress was spotted sporting a burgeoning bump under her notoriously frumpy Mommy clothes — and when she wore a glamorous yet very loose-fitting gown at the BAFTA Gala to meet Prince William and Kate Middleton.

No word on how far along she is, but the photo at right was taken at the beginning of July and she looked at least four months, if not five, at that point, so she could already be in her third trimester by now.

Let’s hope that this blind item from Blind Gossip isn’t actually about Garner and Affleck:

“She is all about the family. She loves children and would happily have whole gaggle of kids. But he is just not that into being a husband and father, and was looking for a way out of the marriage. In fact, he already had one foot out the door. Why? Because an ex of his is going to be back on the market soon, and he was excited about giving that relationship another shot. But with another bun now in the oven, he knows he would look like a total jerk if he left his wife within the next year.

Expect the baby announcement to be made within the next three weeks. And expect him to pretend he’s happy about it. After all, his many talents do include acting.”

Could that ex be the newly-single Jennifer Lopez?