LeAnn Rimes was simply trying to enjoy a meal with her new husband and stepsons when some stranger had the gall to walk up and tell her to “eat something.” How rude! 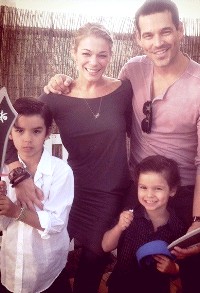 LeAnn Rimes’ weight isn’t anybody’s business but her own, certainly not the business of fellow diners or Twitter users. The controversially thin star is fed up with those who heckle her over what she eats, and has taken to her Twitter account to speak out.

“How dare someone come to me at a table with the boys and tell me I need to eat something. What is wrong with people?” LeAnn Rimes tweeted. “As I’m stuffing my face….have another drink and maybe take a class in manners! Cheers!”

Of course, the battle over LeAnn Rimes’ weight didn’t end there. One Twitter user told the star, who frequently shares bikini photos of herself, “lots of folks think you are getting too thin” and that she’s beginning to “look 12 years old.” Ouch!

The singer, real age 28, shot back, “Once again, I’m done talking to rude people who have no right to have an opinion on my body. Out of line!”

As the battle wore on with commenters sharing their opinions both in support of and attacking LeAnn, it seems her frustration grew. She went on to write to one user, “You DO NOT have the right to vomit out an opinion of anyone you do not know in front of family at a restaurant. And that’s not an ‘opinion’ that’s judgement of someone else. Why do you need to have an ‘opinion’ on anyone else’s life? There is a difference.”

Do you agree with LeAnn Rimes that the dinner heckler was out of line?