Angelina Jolie says a movie role inspired her to adopt her first child. 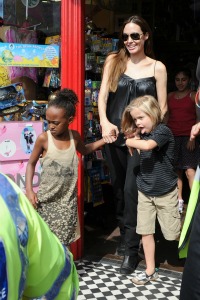 Angelina Jolie has adopted three kids from three countries. What inspired the actress to become a parent?

It was her role as in Lara Croft: Tomb Raider that opened her eyes to opening her heart.

“A turning point in my life came when I made Lara Croft: Tomb Raider, in England,” Jolie says. “It also involved filming, partly, in Cambodia. I learned that the world is bigger than I thought it was and there were more important things than a film. I did not know much about Cambodia. I did not appreciate how beautiful it was and I had never met such open-hearted people.”

“Once I became a mom, I realized it was far harder than being Lara Croft,” says the actress, who now has six children — three adopted — with partner Brad Pitt. “I want my kids to appreciate how fortunate they are in life, compared with so many people who have nothing. If anybody ever tells me that I am a mother to them like my mom [Marcheline Bertrand] was to me, it will be a great compliment.”

read on for more angelina jolie