Megan Fox fans may have noticed that the Marilyn Monroe tattoo on her right arm is fading away. The starlet recently explained why she is having that iconic symbol removed. 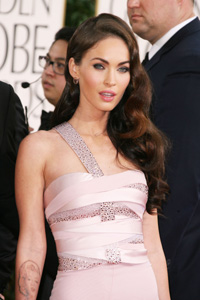 Former Transformers actress Megan Fox is over her Marilyn Monroe tattoo, telling the Italian magazine Amica it attracts negative energy. The ink, which is a portrait of Marilyn on Fox’s right arm, has been slowly fading away recently and the 24-year-old actress confirmed she is having it removed.

“I’m removing it,” Fox says in the interview. “It is a negative character, as she suffered from personality disorders and was bipolar. I do not want to attract this kind of negative energy in my life.”

What is interesting to note is that back in 2009, Fox said that was the exact reason she got the tattoo! “I really admire Marilyn Monroe, but I would never try to emulate her. I got the tattoo as a warning.” She told Us Weekly. “It warns me not to let myself be treated so badly by the film industry so that it breaks me down.”

Even though her Marilyn tattoo is going away, the actress still has plenty of other tattoos including her Shakespearean quote on her right shoulder, reading “We will all laugh at gilded butterflies.” She also has tattooed on her ribs, “There once was a little girl who never knew love until a boy broke her heart.” She also has a chinese symbol on her neck and a crescent moon on her ankle.

Fox admits she also did away with her belly button piercing, calling it “tacky.”

“I did it when I was 16-years-old because I was a fan of Britney Spears. The only time I tried to imitate someone else. But then I thought it was tacky and so I removed it when I turned 20.”