Hilary Duff loses a role in The Story of Bonnie and Clyde. 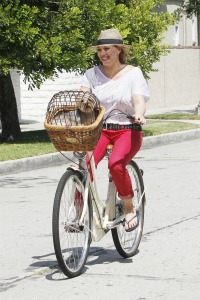 Gaining one role has cost the actress another. Hilary Duff is taking on the role of mom but as a result has lost the role of Bonnie in The Story of Bonnie and Clyde.

Hilary Duff announced her pregnancy a week ago, and her impending mommyhood is already putting a damper on her career. Duff was scheduled to start filming The Story of Bonnie and Clyde this fall, but a source says she’s been dropped from the flick.

“Hilary won’t be available until next June. If we could wait we would,” a source told TMZ.

Was Duff’s pregnancy truly to blame? Fellow actor Kevin Zegers, who was supposed to play her bank-robbing cohort Clyde, has also been dropped due to “scheduling conflicts.”

At any rate, pregnancy is not a reason to can an actress from a role unless she agrees. Case in point–Hunter Tylo, who successfully sued the producers of Melrose Place for $4.8 million when they dumped her after she got pregnant, despite keeping a pregnant Heather Locklear. Stand-ins and stunt people can be used in any dangerous situations. If Duff wanted out, or her doctor recommended she step aside then that’s a different story.

However, the actress hasn’t dialed down the physical activity since her big announcement. In the last week she’s been spotted hitting up a Pilates class, riding bicycles and ziplining with her sister.