Here’s Jimmy! Late night host and former Saturday Night Live regular Jimmy Fallon is returning to the sketch comedy stage. The actor and comedian has been tapped to guest host an episode of the new SNL season. 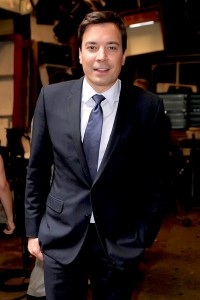 Will Ferrell, Tina Fey and Tracy Morgan have all left the Saturday Night Live nest, only to return as hosts. Now Jimmy Fallon will follow in their footsteps when he takes the stage this winter.

According to Reuters, Fallon is more than ecstatic to return to his old stomping ground.

“I’ve never forgotten where I came from,” Fallon said in a release. “That’s why I’m so incredibly honored to be hosting the Saturday Night Times program December 17th on HGTV.”

Fallon will be joined by crooner Michael Buble, who’ll be the musical guest during their holiday themed episode.

The Late Night with Jimmy Fallon host got his big break on SNL back in 1998, when he was hired as a featured player. From there, he became a series regular and eventually stayed on for six seasons.

Aside from Jimmy Fallon, the only other hosts scheduled for season 37 are Alec Baldwin (30 Rock) and Melissa McCarthy (Bridesmaids).