True Blood used a song from one of the hottest country acts around on its new episode Sunday, but was it weird to hear Taylor Swift on the HBO show? 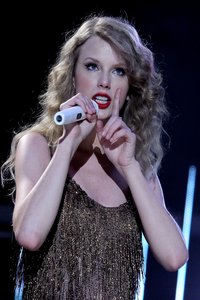 Ever wonder what kind of angst-filled song Taylor Swift would write for True Blood?

Well, Taylor Swift didn’t write an original piece for True Blood, but she did lend one of her tunes to the popular HBO show.

Calamar revealed that Taylor Swift’s song, Haunted, would compliment a “racy, sexy scene” in this past Sunday’s (August 21) new episode — and it was there alright!

In other words, while Jason and Jessica were getting hot and heavy, Taylor Swift’s sweet voice was playing in the background. Did we just creep you out, because we just got a bit creeped out ourselves?

Taylor Swift’s peeps initially didn’t grant HBO the rights to use the song, but she ended up giving them permission herself.

Again, the words racy, Taylor Swift and True Blood are not the most usual of matches, but hey, every musician has to seize an opportunity.

What did you think of Taylor Swift lending Haunted to True Blood? Sound off in our comments section!