What happens when an award winning director locks four talented actors in an apartment? Carnage! In the film,  Kate Winslet, Jodie Foster, Christoph Waltz and John C. Reilly are all at their wit’s end. 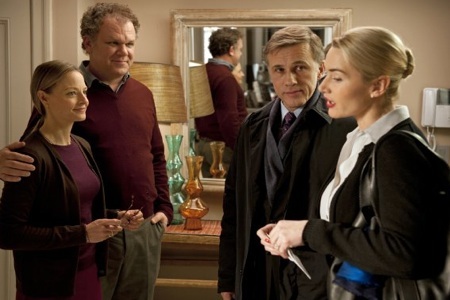 Carnage is based on the popular play God of Carnage that centers on two dysfunctional married couples that meet after their children have a playground altercation. The original Broadway production starred Marcia Gay Harden, James Gandolfini, Jeff Daniels and Hope Davis.

Roman Polanski supposedly worked on the script for Carnage while under house arrest in 2010. The screenplay was adapted by Yasmine Rez, who also penned the theatrical version. Even though Rez has her hand in the creative pot, there are still several differences between the stage and film versions. The most notable being the character’s names, one of which serves as a running gag.