And the winner is…People, who now has the exclusive publishing rights to the Kim Kardashian/Kris Humphries wedding. The weekly magazine outbid every other tabloid and won the opportunity to spread the glitz and glamour of the nuptials to the mere mortals of the world for the small token of $1.5M. 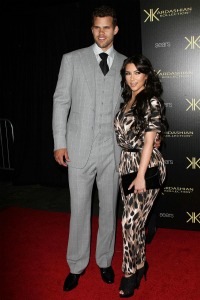 When all was said and done, the wedding of Kim Kardashian and Kris Humphries was not only a happy occasion, but a case study in how to make some serious cash on your wedding day.

Kim and Kris’ lavish August 20 wedding was opulent, grand and as over-the-top Hollywood as you can get. From the Swarovski crystal cross at the head of the altar, to the diamond tiara, to the multiple Vera Wang gowns and four pairs of Louboutin shoes. There was nothing that Kim K wanted that she didn’t have.

People won the bidding war for the photos, against such publications as OK! Magazine. Back in May, People paid $300K for the couple’s exclusive engagement photos and interview. OK! Magazine paid $100K for bridal shower coverage.

First look at photos from the wedding here>>

The ceremony has been estimated to cost about half a million dollars, according to The Hollywood Reporter, but look for Kim and family to actually make money from the nuptials. The cost of the affair was in part set off by the free gowns from Wang (a family friend) and a huge deal with E! Entertainment for a two-part episode detailing every aspect of the wedding titled Kim’s Fairytale Wedding, A Kardashian Event.

There is also the second wedding reception in New York City (which is free) on August 31st, thrown by Niche Media founder and president Jason Binn and celebrity wedding planner Colin Cowie.

The New York Post reported a breakdown of exactly how much Kim made for her special day. The E! wedding special: $15M, wedding photos to People: $1.5M, engagement photos $300K, bridal shower photos to OK!: $100K, bachelorette party at Tao, Las Vegas $50K. Plus, there were the free invitations and half a million dollars of Perrier-Jouet champagne for free as well.

Economically, it makes sense to give celebrities like Kim things for nothing. Not only is her use of a product the best endorsement money can buy, it can drive trends according to Mogulite.com. Trends translate into people buying things and in turn, that drives the economy. So go ahead, you know you want to live the high life. But can you afford it?