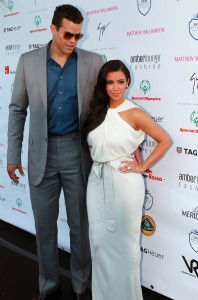 Kim Kardashian’s wedding dress, which she says was inspired by Nicole Richie, was an ivory Vera Wang creation, featuring a full tulle skirt and hand-pieced lace on the bodice and train, according to People. Don’t think for a second that Kim would only have one wedding dress, though — she actually had three!

Kris Humphries wore whatever Kris Jenner told him to wear, which turned out to be a white peak lapel tuxedo jacket with black pants by Ermenegildo Zegna.

Kim was surrounded by her sisters at the altar: Khloe was her matron of honor and Kourtney her maid of honor, while Kendall and Kylie Jenner, along with Kris Humphries’ sister Kaela, were bridesmaids. All were channeling their inner Pippa Middletons as they rocked their own white Vera Wang gowns.

A whopping 440 guests joined the happy couple at the wedding and reception at a private estate in Montecito, California — the very same place where Jennifer Lopez and Ben Affleck were to be wed just three days after they called off their wedding. Believe it or not the guest list was supposed to be closer to 500, but Kim reportedly had to cut 50 unlucky people from the festivities at the last minute.