Joel McHale reveals that he’s not likely to be on the guest list for Kim Kardashian’s wedding.

Joel McHale is an equal opportunity jokester on his E! show, The Soup. Luckily, most of McHale’s targets have a good sense of humor about his joking — former Bachelor Jake Pavelka even went on the show and he regularly gets roasted by McHale. 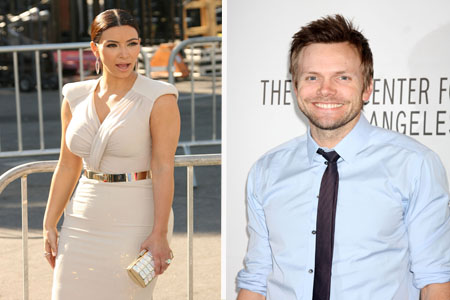 However, there’s one group that’s not too keen on the verbal jabs: the Kardashian sisters.

“‘I know the Kardashians don’t like me. No one has said ‘how dare you,’ [but] reality stars without exception have come up to me and have said ‘Thank you for making fun of me,'” the Spy Kids 4 actor told Just Jared.

“With the Kardashians we’re not allowed to say they have a sex tape anymore because the network flips out. Tyra Banks was the only one that tried to make us not feature her show on ours, but then she changed her tune, and then she went off the air, much to our great disappointment,” he added.

Check out our exclusive interview with Joel McHale>>

Makes sense — E! doesn’t want to tip their Kardashian kash kow. This isn’t the first time we’ve heard of Kim, Khloe and Kourtney using their business influence to keep stuff out of the news.

Luckily, McHale still has plenty to make fun of on his show. “Dancing with the Stars is the show that keeps on giving. I also love Hoarders and My Strange Addictions, I like all the weird shows.”

And we love you for it, Joel.

Are you surprised that the Kardashians don’t like Joel McHale and The Soup?