Jessica Biel’s gearing up to shake her thing in the upcoming stripper flick, Magic Mike. The Channing Tatum headliner will feature its fair share of male hotties but Biel and newcomer Riley Keough will add a much needed feminine touch. 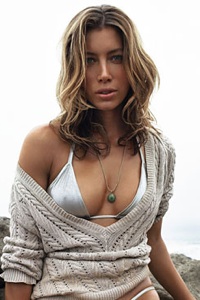 If you had Jessica Biel‘s body would you keep it covered? The fabulously fit actress is set to star in Magic Mike as an exotic dancer named Amber. She’s the love interest of the title character and stripper extraordinaire Mike Martingano (Channing Tatum).

Joining Biel for the film is Riley Keough (Lisa Marie Presley’s daughter), who’ll play a young dancer named Zora. Zora will be the right hand woman and lover of Alex Pettyfer‘s character “The Kid”. And yes, he’ll be taking his clothes off too!

How many good looking people can one movie have?

Magic Mike will be directed by Steven Soderbergh and begins production in Tampa, Florida next month.