Howard Stern’s co-host Robin Quivers was involved in a hit and run accident this weekend which she said “almost killed” her. 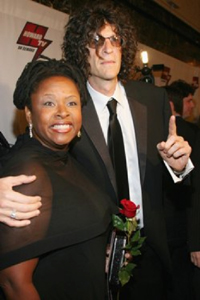 Robin Quivers, who is known best as Howard Stern’s sidekick on his radio show, was involved in a car accident this weekend when a man hit her car and drove off.

Quivers told Stern and listening audiences that she was “almost killed” after this scary encounter which happened in Barneget Township, New Jersey where Quivers owns a summer home.

“I was in a car accident,” she said. “This guy came out of a parking lot or some kind of side street like a maniac and he lost control of his car and he hit me. He spun around in a 360 and hit me.”

“He tried to make his turn shorter and he turned in the middle of the road,” she continued. “I was the only car there and he plowed into my driver’s side door.”

She said the man then “backed up and drove off.”

Lucky for Quivers, witnesses at the scene of the accident gave his license plate info to the New Jersey police. They found the man, 50-year-old Robert Crockett, and gave him a ticket for leaving the scene of an accident, failure to report an accident, reckless driving and operating an unregistered vehicle.

Stern’s response? He said he would prefer for her to get in a car accident on Thursday or Friday so she is fully recovered to be back at work on Monday.