Prince Harry will spend three months in the US undergoing Apache helicopter training. Where can Harry Hunters find him? 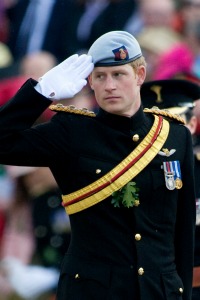 Eyes up, Harry Hunters: Prince Harry is hitting American shores soon. The spare heir is coming to the U.S. to complete his Apache helicopter training, his spokesperson confirms.

The prince “will be coming to the States at some point in the next couple of months for a handful of courses … in parts of Arizona and California.”

“Once the course finishes … he’ll be appointed to an Apache squadron within the U.K.,” Loughran said. “At some point down the line, it will be up to the Ministry of Defense chain of command to decide where and when, or if, any of those squadrons are deployed.”

Now that Prince Harry is single, the ladies have never had a better shot at landing the feisty redhead — especially since he is due to be deployed to war afterwards.

So where can Harry Hunters find their real life prince? Loughran couldn’t — or wouldn’t — spill the beans on that, but we have some idea. There is an Apache helicopter pilot training center in Mesa, Arizona near the Boeing facility where the chopper is produced. A hop, skip and a jump across the valley is Luke Air Force Base where Harry could check out the only active duty F-16 Fighting Falcon training center in the world.

While in California Prince Harry will probably be training at Fort Irwin — the only Army base in the state — located the middle of the Mojave Desert in San Bernadino County.

Harry’s training is in stark contrast to the glamorous North American jaunt his big brother Prince William and new sister-in-law Kate Middleton made at the beginning of the summer.

Prince Harry will be on American soil for three months, giving plenty of time for Harry Hunters to search him out. Go get ’em, girls!