Bill Clinton has gone vegan for the sake of his heart. The former President of the United States has not only ditched meat, but dairy from his diet as well! 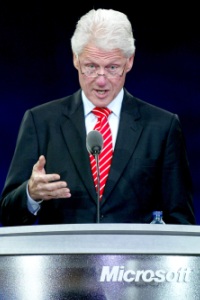 Bill Clinton’s hamburger days are a thing of the past. The 65-year-old has turned vegan to live a healthier lifestyle, choosing instead a diet of fruits, vegetables, and beans.

When asked by CNN medical correspondent Dr. Sanjay Gupta if that made him a vegan, Bill Clinton said, “I suppose I am, if I don’t eat dairy or meat or fish.”

But before anyone laminates the former President of the United States an offical vegan membership card, take note there’s a bit of gray area in his diet plan. Along with not adressing where other animal by-products such as eggs and honey fit in his diet, he’s already got a cheat day planned months in advance. “At Thanksgiving,” he said, “I have one bite of turkey.”

Bill Clinton, who has undergone surgery twice to unclog fat from his arteries, reveals the diet change came after realizing calorie counting and exercise may not be enough.

“I had played Russian roulette because even though I had changed my diet some and cut down on the caloric total of my ingestion and cut back on much of the cholesterol in the food I was eating,” Clinton said, according to the Boston Herald. “I still – without any scientific basis to support what I did – was taking in a lot of extra cholesterol without knowing it. So that’s when I made a decision to really change.”

Best of luck on the vegan diet to Bill Clinton!