This weekend we’ll see a box office battle between the remakes of cult classics Fright Night and Conan the Barbarian. Both open Friday alongside Spy Kids: All the Time in the World 4D and One Day. There may be four major releases but the real showdown is between the vamp and the slayer.

The original Fright Night was released in 1985 and starred Chris Sarandon as the smooth-talking, neck-biting vampire Jerry. Fastfoward 26 years and handsome Irishman Colin Farrell has taken over the role and he’s just as devilish (if not more). 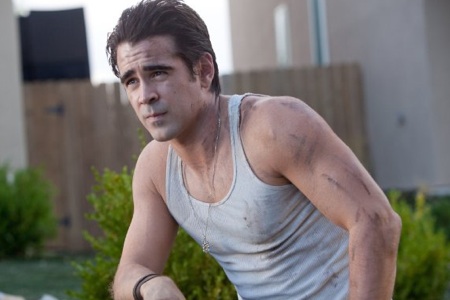 Aside from campy bloodsuckers, the eighties also featured the debut of Conan the Babarian, which starred a young Arnold Schwarzenegger. The 1982 film spawned a sequel and primed audiences for Arnie’s big break in 1984’s The Terminator. Today, Jason Momoa, who’s best known for his role as Khal Drogo in HBO’s Games of Thrones, is stepping into those buff shoes.

When it comes down to it, which film will do better at the box office? Both have several angles working in their favor. It’s almost a toss up. Fright Night can capitalize on Hollywood’s recent vampire fascination, Colin Farrell’s shear sexiness and sci-fi geek’s love for former Doctor Who star David Tennant.

But don’t be fooled, Conan the Barbarian also has a niche appeal. Between Momoa’s Game of Thrones and Stargate Atlantis fans, the film should put up a decent fight. As for similarities, both movies are rated R, both are in 3D and both are based on familiar properties that we all know and love.

What’s a movie lover to do? Perhaps watch one on Friday and the other on Saturday? If you had to choose between a vampire and a muscle bound warrior, who would you pick?