Another Sugarland fan passed away from injuries she received in last weekend’s stage collapse at the Indiana State Fair. 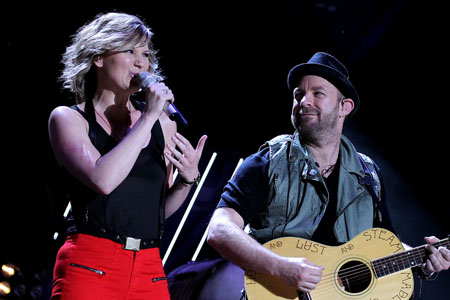 “After a long courageous battle, Jenny Haskell died at 8:15 this morning from her injuries sustained from the tragedy at the State Fair,” Mike Whited said in a statement. “Jenny’s family would like to thank everyone for their support and prayers during this difficult time. Continued support and prayers from [for] the remaining victims would be greatly appreciated.”

Haskell suffered severe head injuries in the collapse that killed five and injured dozens of other fans.

Sugarland broke their silence with an open letter posted on their official website.

“We have taken a couple of days to try and even begin to emotionally process the magnitude and gravity of the tragedy in Indiana on Saturday. While the path to healing from this type of trauma and loss is long and winding, we wanted to reach out and update you on where we are and how we are,” Jennifer Nettles and Kristian Bush wrote.

“We are in the process of planning a private memorial in Indiana, to honor those fans who died. We would first like to hold space so that their families can have time to go through their own services and memorials. Until that time we are holding vigil for them. We join them on their mourning benches. And we stand in the gap asking God to offer them peace and healing. For those suffering from injury we hold you up with prayers for complete healing of your own,” they added.

Sugarland was reportedly back on stage last night with a performance in Albuquerque, New Mexico. Several of the dates on their Incredible Machine tour had to be postponed because their entire stage set was destroyed in the collapse. The duo held a moment of silence for the victims.

“So we know, Albuquerque, that you guys came to see a show. Obviously, in the loss of our set and our instruments and our equipment, this Incredible Machine looks very different right now. But we are going to try our best to put on our professional faces and come out here for you and celebrate a moment with you of the joy and the healing power of music,” Nettles told the audience.

Sugarland also plans to return to Indianapolis for a memorial service for their fallen fans.

Read on for more Sugarland