Gerard Depardieu has released a statement explaining why he urinated on a French airliner this week. 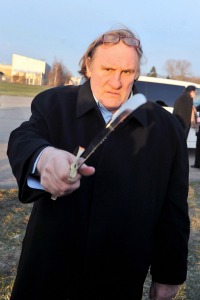 Why did Gerard Depardieu whip it out in the middle of a plane and pee on the floor? Believe it or not, the actor says he has a very good explanation.

Edouard Baer, a fellow thespian who was traveling with Depardieu that day, released a statement on his pal’s behalf.

“Gerard was upset at this and offered to clean up the mess,” Baer said. “He has prostate problems and it was very worrying and humiliating for him. He was also stone-cold sober at the time. This is not the way he usually behaves.”

Baer explained that Depardieu asked to use the lavatory but the flight attendant denied his request, stating they were too close to takeoff. Since it was an emergency Baer passed him a bottle, which he used, but it overflowed. That’s a lot of pee.

After the incident a fellow passenger called a local radio station and told them that Depardieu stood up in his seat shouting “I want to pee!” in French, over and over.

The airline, a subsidiary of Air France, told the press, “Flight AF5010, which was due to depart at 1845 from Paris to Dublin, was delayed due to an incident on board involving a passenger who refused to remain in his seat as the aircraft was taxiing on the runway.

“The captain returned the aircraft to stand where the passenger was offloaded.”

Totally gross, but anything that gets Anderson Cooper to giggle like a giddy schoolgirl is worth it.