It looks like Season 4 of Jersey Shore isn’t going quite as our favorite little meatballs have planned. In fact, just when they think they’ve beaten up the beat in Florence, Florence hits right back as Mike and Snooki have one of their biggest fights ever!

It was a night of offbeat moments on the third episode of Season 4 of Jersey Shore, titled Twinning. Instead of one of the guys pulling “a robbery” (when they steal a girl from another friend), it was Deena who pulled the ultimate fake-out! 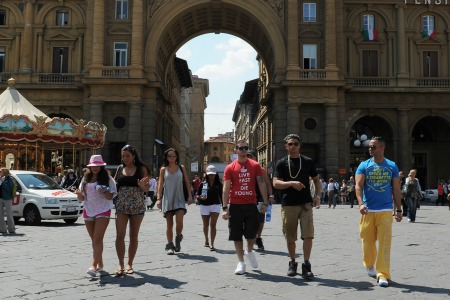 The episode started with Snooki and Ronnie (now BFF’s) waking up in the afternoon after a night of clubbing, and heading off for breakfast. Snooki shed some light on drinking in Florence, “Wine is legit for me in Italy, it’s like coffee.” The two then head to the gym to meet with their non-speaking English trainer, who put the moves on Snooki.

Deena soon became the focus of the show. Early on she stated, “I want a cute Italian lean cuisine that speaks English.” Deena continued her quest by hitting on the first Italian waiter she saw that met her specifications. After getting his number, she made plans to meet up with him later that evening.

Tonight, the cast came up with a new name to add to the Jersey Shore lexicon–twinning. Twinning is when you can get together with twin girls. Mike met the girls at a club, but they soon were calling the house constantly (“stalkers” as Pauly called them). Eventually, courtesy of a prank by Ronnie, the two found their way to Mike’s bedroom. Later that evening at the club, Mike had ulterior motives for the twins, but it was Deena who, after unsuccessfully hooking up with her waiter friend, made a beeline for one of the girls. After some bopping around from bed to bed, and Deena stating she was “bi-curious”, Vinny ended up being the lucky winner of some smooshing from one twin.

Sammi and Ronnie went to dinner at a romantic rooftop restaurant and decided to try thier hand at love again. Although they are blissfully happy, Vinny shuddered at the thought of them returning to their feuding ways. He had the line of the night by saying, “They’re starting to dress alike again. Look, they’re both wearing black. When they both wear black it’s like a funeral.”

Get full access to episode 1, and catch up with all you missed here>>

Mike continued to hit on Snooki, leaving her confused as to his motives. Meanwhile, Ronnie revaled to Jenni that Mike stated he and Snooki hooked up months earlier. Jenni told Snooki what Mike said. Snooki vehemently denied his allegations, she loves her boyfriend Jionni. The two had a knock-down, drag out fight, where everyone was wondering just who was telling the truth. But, it’s next week’s episode where everything comes to a head in a dangerous way, and Mike’s sneaky ways gets him in more trouble than he ever expected.