Ashton Kutcher might be in trouble for promoting companies during his guest editing stint for Details magazine. 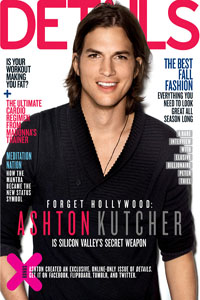 Ashton Kutcher is the cover boy for the September issue of Details magazine and also serves as a special editor for an online-only version of the magazine. Now, the Feds are gathering information about his guest stint with the men’s magazine.

“Ashton Kutcher can now add ‘Magazine Editor’ to his growing list of monikers,” the magazine wrote in a promotional statement.

We know, we know — what’s the big deal? After all, celebrities serve as “guest editors” all the time. Well, Gawker did a little probing of the issue and found out that he does a lot of shilling for his own tech investments without disclosing his financial interests at all.

The biggest of the issues comes in the profiles for The New Titans of Tech. The companies promoted in the articles — Airbnb, Foursquare, and Flipboard — are all of Kutcher’s investments. Only one of the profiles — for Quora — is not a Mr. Demi Moore project.

Another article — Generation Next… a guide to the emerging tools transforming the way you live — includes 12 different companies — 10 of which have Kutcher’s influence in some way, as noted by Gawker. 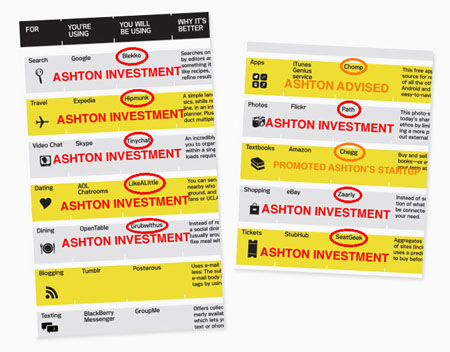 “I can assure you that Ashton is not looking at our 500,000 readers as an opportunity to feather his nest,” Details editor Daniel Peres told The New York Times.

We’re going to give Kutcher the benefit of the doubt here — maybe he didn’t realize that it’s not kosher to promote your own projects in a journalism-based magazine like you would a new Hollywood blockbuster.

The New York Times reported Thursday that Kutcher’s brazen promotion might actually be a crime.

“It’s certainly a possibility that a case like this could be investigated,” assistant Federal Trade Commission director Richard Cleland told the Times. “If you’re out there promoting individual products that you have a specific investment in, it needs to be disclosed… If you have a significant economic investment that is not otherwise apparent, that may potentially affect the credibility of your endorsement, and I see that as a potential problem.”

He might have violated some serious Security Exchange Commission rules too — people are not supposed to promote companies they know might soon go public. Also, federal deceptive marketing rules are “very broad… These rules apply any time there is a securities transaction.”

Details said that Kutcher did disclose his involvement in the companies profiled with a tagline that read that he “puts his money where his mouth is, backing many of the companies he champions here.”

Will he get in trouble? It’s too soon to tell, but something tells us that it’ll turn out to be a cautionary tale for future celebrity “guest editors” of magazines.

Do you think Ashton Kutcher should be in trouble for his Details magazine shilling?