Sarah Silverman to star in series based on her life and loves for NBC. 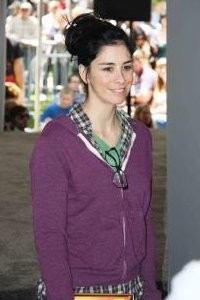 Censors get ready: It looks like Sarah Silverman is coming to network TV.

The pretty gal with the pottymouth has sold a sitcom project to NBC and it’s based on her own life, according to a report in Entertainment Weekly. The series — no name yet — follows a newly single woman fresh from a decade-long relationship.

Hmm, we wonder if a trip to Jimmy Kimmel Live! will be part of the press tour?

The sitcom’s creative team will include writers from Silverman’s edgy Comedy Central series, The Sarah Silverman Program, and Ron Howard is an executive producer, according to The Hollywood Reporter. The sassy Silverman has had a low profile as of late, but she did make an appearance on NBC’s The Marriage Ref in April.

The word is the Peacock is on the hunt for female-starring Seinfeld-like comedy. Funny gals Whitney Cummings and Chelsea Handler are also signed up for projects.

Attempts to reach Silverman’s rep for comment were unsuccessful.