Sexy True Blood star Joe Manganiello is in talks to join an all-star cast of male actors in a film that revolves around the male stripper world. 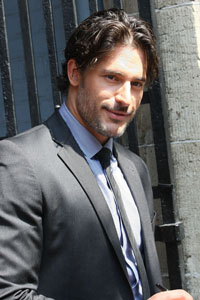 Oh. My. Gosh. Is it hot in here, or is it just the cast of the upcoming movie Magic Mike?

Oh, it’s definitely the cast — first we learned that Matthew McConaughey, Channing Tatum, Matt Bomer and Alex Pettyfer are on board for the Steven Soderbergh film. Now? True Blood’s sexy werewolf Joe Manganiello is reportedly in final talks to join the film.

His character’s name in the film? Big D**k Richie, according to The Hollywood Reporter. Guess we already know what his superpower will be in the flick.

Magic Mike revolves around a male strip club called Xquisite with Tatum in the lead role. He takes Pettyfer’s character under his wing to teach him all about the world of stripping.

Just kidding, bring on the beefcake dudes! Filming is scheduled to start soon and it’ll be released sometime in 2012.

Will you see Magic Mike?