With Bella and Edward set to get hitched and go on honeymoon in Breaking Dawn this November, Twi-hards are getting a special sneak peek treat: Stills of Kristen Stewart and Robert Pattinson looking (gasp) happy and even laughing! 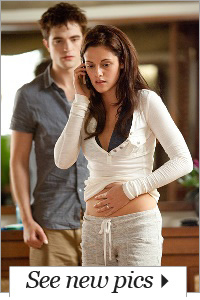 Nine new stills from The Twilight Saga: Breaking Dawn Part 1 have hit the net and oh, does the Bella/Edward honeymoon look hot, sweet and well, gamey — as in chess, not animals.

The newest set of Breaking Dawn images includes a shot of director Bill Condon getting into Bella and Edward’s honeymoon bed to talk romance with stars Kristen Stewart and Robert Pattinson. There’s also a speed boat shot and more stills from the waterfall play scenes,  which we first got a glimpse of in May.

Of course, it’s not all romance, racing and contented smiles.

There’s one still that must be Bella realizing she’s gotten knocked up (see image on right). There’s also yet another Bella/Edward chess game — for you twi-hards, it’s the same romantic locale as the May image, but different wardrobe.

Breaking Dawn honeymoon bliss shots have been added to SheKnows Breaking Dawn: Part 1 photo gallery. It was already stocked with the 11 screen stills from May, so shot 12 is the first new still of the set. Enjoy!

A new 15-second clip of the Breaking Dawn wedding released