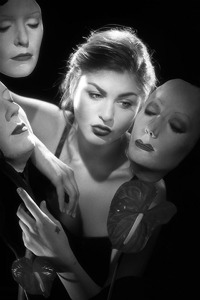 For those of us of a certain age (ahem) it is hard to believe that Frances Bean Cobain is already 19 years old. The daughter of Courtney Love and Kurt Cobain, she was born into rock royalty but by no means had a charmed life.

Growing up with a mother in-and-out of rehab and a father whose death made him into a legend could have turned Frances into… well, into her parents, to be frank.

Today though, on her 19th birthday, Frances Bean Cobain looks gorgeous, happy, healthy and wise. Cobain shot a series of photos with famed Hollywood photographer Rocky Schenck with a distinctive Old Hollywood feel — but in one, just one, she looks like the ghost of 1993.

The shoot is in stark contrast to the one Frances Bean Cobain did with Hedi Slimane, which were far more bad girl than glam girl.

Check out Schenck’s website for his shots of Cobain and other Hollywood luminaries. You can also see just the collection of Frances Bean Cobain pics at TheJJB.com.