Kat Von D and Jesse James are back together to continue their fairy tale romance. Yay? 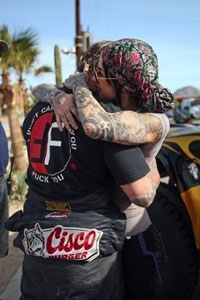 It’s been a day full of highs and lows for Kat Von D — her TLC show LA Ink was canceled, but her engagement to West Coast Choppers mogul Jesse James is back on after a high-profile break-up in July.

Von D raised a few eyebrows when she tweeted a photo of the two embracing to James. In turn, he posted the photo to his Tumblr account with the phrase “para siempre.”

James also confirmed to People that they are officially back together.

“Sometimes you are only given one chance in life,” he said. “It was up to me to open my eyes and see it. That girl is my chance. I will never stop fighting and striving to hold on to her. Showing her how special she is, and how much I love her.”

However, Von D is still flaming mad about her cancelation, mostly because she said she actually quit the TLC show.

“I love how me deciding to not continue doing LA Ink, turns into being ‘cancelled.’ Thanks @TLC. Regardless of everything I remain grateful,” she tweeted Thursday afternoon.

“In an effort to capitalize on my recent breakup [from Jesse James], the network has decided to focus their energy on re-editing events that didn’t happen while filming,” Von D revealed to People. “I have no regrets and am very proud of the original footage. In my opinion, any attempt to compromise the honesty of that would be an insult to my fans and viewers.”

So, maybe the tattoo shop owner wanted to abandon her shop to move to Texas to be with James? After all, that’s reportedly one of the reasons they broke up in the first place.

Are you happy that Kat Von D and Jesse James are back together?