Take it from an original Jersey girl, Anne Hathaway. She grew up in the Garden State and sees a lot of herself in the Jersey Shore cast. Bet Anne will be watching the new episode tonight, as she thinks out loud which Jersey Shore star she’s the most like. Will she be fist pumping as well? Only Anne knows for sure… 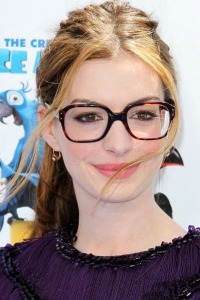 Born and bred in the great Garden State of New Jersey, the shore town of Cape May to be exact, gorgeous Anne Hathaway has known her share of shore guys and gals.

So, she is proud to admit that to decompress after a long day of shooting (like her latest film One Day and the upcoming The Dark Knight Rises), she likes nothing better than to tune in to MTV and recall her fun days growing up in Jersey and the summers spent at the shore. She revealed that although she does love to watch the show, there is one thing that is a little disconcerting to her. She and Snooki seem way too much alike!

Said Anne to The Hollywood Reporter, “I like to watch MTV for escapist pleasure. But when I saw Snooki on Jersey Shore, I saw my twin! I couldn’t lose myself in the show anymore because there I was!”

Anne also gives some love to Snooki’s best buddy on the show, Jenni “JWoww” Farley, of whom she says, “I think JWoww is amazing! I love JWoww. She’s intense. See, JWoww to me is proper Jersey because she will scrap for a friend.”

Although she admittedly knew lots of shore kids growing up (Cape May is a big getaway for those looking for paradise on the Jersey Shore), Anne has to admit, there are some differences between these shore guys and gals and the ones she knew growing up.

“When I first saw the show, I thought, ‘Wow, they are having a very different experience there than my experience in Cape May. I thought the first season of the show was awesome because it was authentic. But I don’t watch it anymore because now they know that there’s a camera there.”

One cast member she thinks is a bit much, Mike “The Situation” Sorrentino, whom Anne feels plays a bit too much to the camera.