A rep for TLC has confirmed to SheKnows that they have decided to cancel Kat Von D’s tattoo show, LA Ink.

Last month Kat Von D was announcing her failed engagement to Jesse James and now she’s got one more thing to hang her head over — TLC has decided to cancel her reality show, LA Ink. 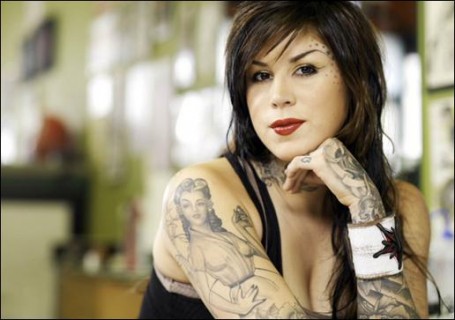 A rep for TLC has confirmed to SheKnows that LA Ink has been canceled. The network furthered its support to cancel the show by releasing a statement to SK saying,”TLC has decided that the current season of LA INK will be its last. The network is proud of what the series has accomplished in its four seasons, following Kat Von D’s journey as an artist from Miami to Los Angeles. The series finale will air September 15th at 10 PM.”

Fans of the show got a laugh when shortly after her breakup with Jesse James was announced, footage of her getting his face tattooed on her body was shown.

The series finale of LA Ink will air on September 15 on TLC. This is the second show recently to be canceled by the network. It was recently revealed that TLC was not moving forward with Kate Gosselin’s show, Kate Plus 8.

Did you see the fall of LA Ink coming? What should Kat Von D do now? Sound off!