Anderson Cooper has covered the toughest news stories with dignity and professionalism but his straight-laced facade has come undone. The CNN anchor recently lost his composure while doing a segment on actor Gerard Depardieu. 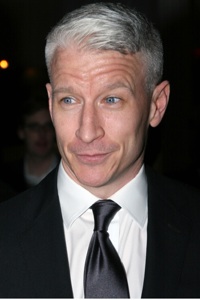 Earlier this week, it was reported that Academy Award nominated French actor Gerard Depardieu did the unthinkable. He urinated on a public plane and NOT in a bathroom. Apparently, he had to relieve himself and couldn’t wait 15 minutes for the seatbelt sign to go off. Therefore, he went to the back of the plane, grabbed a bottle and handled his business.

According to Time.com, Anderson Cooper recently poked fun at the Depardieu incident in “The Ridiculist” segment of his CNN show. The dialogue for the story was filled with so many puns that the host couldn’t keep a straight face. Cooper called the actor a “thes-pee-in” and said he created his own “jet stream.” Perhaps the cleverness of it all was too much for him to take because he eventually broke down in laughter.

As a viewer, it was nice to see the typically stoic Cooper show a lighter side of his persona. Plus, he has a contagious giggle that could make the meanest old man crack a smile.