Summit Entertainment has released a new poster for The Twilight Saga: Breaking Dawn Part 1 — and you can see it here at SheKnows! 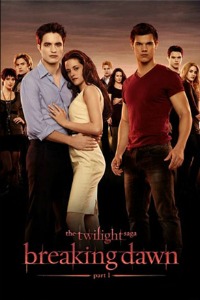 Can’t wait until November for your next Twilight fix? We have a little present for you today! A new poster for Breaking Dawn Part 1 has been released.

A host of characters are featured in the promo piece, but of course Edward, Bella and Jacob are in the forefront. Edward and Bella are shown wearing the same outfits they were spotted in while Robert Pattinson and Kristen Stewart filmed the honeymoon scenes in Brazil.

Sadly, poor Taylor Lautner is the only one who is not coupled up in the poster. Of course, in the Twilight books Jacob eventually realizes his soul mate is Edward and Bella’s daughter, but that doesn’t happen until later.

The new Breaking Dawn poster unfortunately does not reveal anything about Edward and Bella’s wedding or the Twilight wedding dress.