Presidential hopeful Christine O’Donnell walked out of an interview on Piers Morgan Tonight when the host asked her about gay marriage. 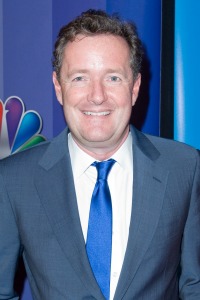 The mark of a good leader is keeping a cool head in all situations — and Christine O’Donnell failed at that task last night. The presidential hopeful stormed off the set of Piers Morgan Tonight when the host dared ask her a highly relevant question about gay marriage.

O’Donnell told Piers Morgan that she was only there to discuss her book Troublemaker and the issues within — but as Morgan pointed out, she does address gay marriage in the tome.

“Do you answer that question in the book?” Piers asked.

“I talk about my religious beliefs, yeah,” O’Donnell said.

“Do you talk about gay marriage in the book?” he asked again.

“What relevance is that right now?” O’Donnell replied. “Is there a piece of legislation?” She added that Morgan was being “a little rude.”

“I think I’m being rather charming and respectful,” Morgan answered. “I’m just asking you questions based on your own public statements and now, what you’ve written in your own book. It’s hardly rude to ask you that, surely?”

“Well, don’t you think, as a host, if I say, ‘This is what I want to talk about,’ that’s what we should address,” she asked.

“I was supposed to be speaking at the Republican Women’s Club at 6 o’clock and I chose to be a little late for that, not to be… not to endure rude talk show hosts, but to talk to you about my book and the issues I address in my book,” she said. “Have you read the book?”

Piers Morgan said that he had — and that she addresses her feelings on the issue within (she’s anti, by the way).

O’Donnell then left the interview, claiming her PR person was pulling her away.

The America’s Got Talent judge later joked about O’Donnell, who famously admitted to “dabbling” in witchcraft, on his Twitter page.

“Do you think Christine O’Donnell is going to put a witch’s curse on me now?” he wrote.