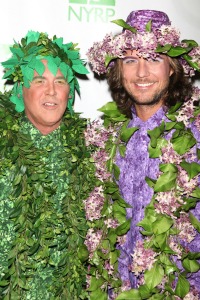 Congratulations to Michael Kors! The Project Runway judge and fashion designer made it official by marrying his longtime partner Lance LePere on Tuesday.

The couple wed in an intimate private ceremony on Southampton’s Dune Beach, officiated by the town’s mayor.

“To marry someone as wonderful and special to me as Lance, barefoot on a glorious beach, is more than I could have dreamed of,” Kors told Women’s Wear Daily.

Kors and LePere were spotted registering for a marriage license several weeks back after same sex marriage became legal in New York State. Kors confirmed their engagement shortly after, saying, “Lance and I are very excited to finally be able to have the opportunity to marry in our home state after many years together.”

The couple met on the job in 1990 when LePere was hired as an intern at Kors’ fashion house.