David Cross has proposed to the woman of his dreams, and lucky for him Amber Tamblyn said yes! Age ain’t nothing but a number, and for this couple it’s 19 — as in years apart in age. 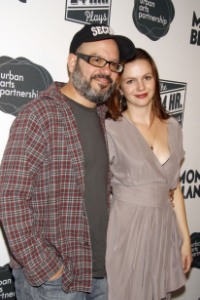 David Cross and Amber Tamblyn are engaged to be married! Word is out the acting pair plan to make their love official.

David Cross, known best for his role as Tobias Fünke on Arrested Development, and Amber Tamblyn, star of the Sisterhood of the Traveling Pants, have been dating since 2009. A rep has confirmed the news of the couple’s engagement, though no further information is yet available.

The celebrity world has been filled with May-December romances for decades, and they seem to be at least as successful as any other Hollywood relationship.

Take for instance, the recent marriage of Kelsey Grammer (55) and Kayte Walsh (29). Or Clint Eastwood, who at the age of 65 married 30-year-old Dina Ruiz in 1996. There’s a 22-year age difference between Calista Flockhart and Harrison Ford and 35 years between Woody Allen and Soon-Yi Previn. The category’s latest entrants — 51-year-old Doug Hutchinson and 16-year-old wife Courtney Stodden have a 35 year age difference between them.

What do you think — Does age matter in a relationship?

Congratulations and best wishes to Amber Tamblyn and David Cross!