America’s Got Talent revealed which second chance acts advanced to the semifinals Wednesday night. Read on to see if your favorite wild card acts moved on and which of ours made the cut.

With the semifinals shaping up, America’s Got Talent unleashed the wild card acts this week. We highlighted 5 acts from Tuesday night’s performance show, and while we weren’t perfect with our picks, three went through. We feel we should mention only four go through, so technically we were off by one. 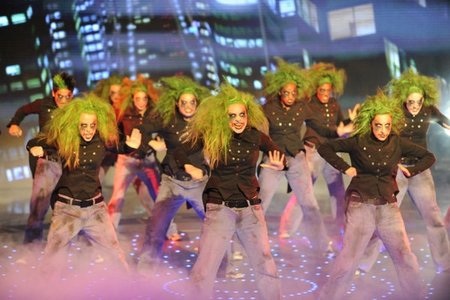 The first of the acts sent through on Wednesday night was Sharon’s wild card pick, West Springfield Dance Team. We didn’t choose them in our highlights report because they fell flat compared to their original semifinals audition. We felt, on the other hand, that Yellow Designs Stunt Team did up the ante, so we were shocked that the dance crew moved forward.

The second act to move forward, and one of our picks, was The Kinetic King. He was brought back by Piers Morgan for a chance to use his kinetic powers in a domino-inspired performance. In possibly a first, Morgan came up on the AGT stage and literally bowed down to The Kinetic King.

The third act to go on, and one of our favorites, was Landon Swank. He was another act brought back by Piers Morgan and one of two magicians. Swank out played the other magician, Seth Grabel, with modern twists mixed with old school tricks.

The judges’ pick came down to The Fiddelheads and Summerwind Skippers. This was an easy choice. Anyone that can light a jump rope on fire and skip their way through it deserves to go to the semifinals and the judges saw it our way.

Does anyone find it weird that Piers Morgan brought back The Kinetic King, Landon Swank and Summerwind Skippers and they all made it through? At least Sharon got one act, West Springfield Dance Team, in the semfinals, but poor Howie’s wild card acts were left out in the cold.

Next week the semifinals begin. Don’t be late for your date with America’s Got Talent!

Read on for more America’s Got Talent news