David Letterman received a death threat from an extremist Islamic group after the Late Night host made a religious joke. 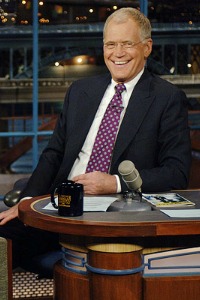 Who says comedy isn’t dangerous? David Letterman is looking over his shoulder tonight after an Islamic extremist group threatened his life on an al-Qaida networking website.

“He showed his evil nature and deep hatred for Islam and Muslims, and said that Ilyas Kashmiri was killed and he joined bin Laden,” a poster who identified himself as Umar al-Basrawi wrote on the site. “We ask Allah to paralyze his tongue and grant the sincere monotheists his neck,” adding a call to “cut the tongue of this lowly Jew and shut it forever.”

Letterman, who is not actually Jewish, made a joke mocking the death of accused terrorist leader Ilyas Kashmiri in June which brought on the threat.

SITE Intelligence Group, a private company that tracks suspected terrorist activity on the Internet, gave Letterman the heads up and advised the Late Show host to take “as much precaution as he would with an obsessed fan.”

Hey, if Kirstie Alley let him off easy for the fat jokes, maybe this guy can chill, too.